4iP Council speaks to Aloys Hüttermann author of a recent paper analysing patent invalidity rates. He claims that the assumption expressed in recent publications that the high (partial) invalidation rate of the Federal Patent Court suggests a poor patent granting practice in general is not true. This is mainly attributable to the failure to take into account patents which are involved in an infringement suit, but the validity of which is not challenged. 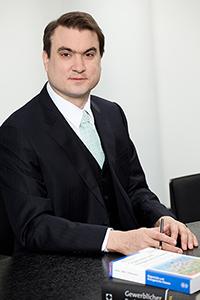 Dr. Aloys Hüttermann, born 1972, is founding Partner at Michalski ∙ Hüttermann & Partner, Düsseldorf. He has a diploma degree and Ph.D. in Chemistry and is a qualified German and European Patent Attorney since 2006. In the same year he co-founded Michalski ∙ Hüttermann & Partner. He is co-author of a textbook in Organic Chemistry as well as several juridical publications in the field of intellectual property, including a textbook on patent law. His main areas include all fields of intellectual property, both in prosecution and litigation as well as due-diligence, M&A, FTOs and licence contracts.

Since 2013 Aloys Hüttermann has been continuingly included by IAM magazine in the IAM 1000 list of the 1000 best patent professionals worldwide and since 2014, he is selected ‘IP Star’ by MIP magazine.

Dr Hüttermann has been appointed as vice chair of the European Practice Committee of the Intellectual Property Owners Association (IPO), a committee which won IPOs Outstanding Committee Award in 2014. He is lecturer at the University of Applied Sciences Niederrhein in Krefeld.

Your paper Paper tigers or real tigers? analysing patent invalidity rates comes to different conclusions than prior papers from Hess et al. and Henkel/Zischka. What is in your opinion the reason for such divergence? What motivated you to write the paper?

These authors have gathered data in a very diligent way and I don’t doubt them. The difference between these authors and me, as you pointed out, is that I disagree with their conclusions. In my opinion one cannot derive from the invalidity rates at Bundespatentgericht to overall patent quality because there are other significant factors that cannot be ignored. One big factor is the fact that only 50% of all patents that are the subject of an infringement action are attacked by a nullity action and that is the main argument of my article.

However, I should point out that I do not claim to have found all factors which come into play. Of course the majority of patents are not infringed because they are simply not interesting. On the other hand, there are many valuable patents which are never infringed because they are respected, for example, because they are found in a Freedom to Operate (FTO) analysis and competitors design around. Another good example is the pharmaceutical industry. Many generic companies do not attack the first or base patent on a new drug but only the 2nd and further generation patents. They simply wait for the base patent to expire. So how do you include these patents? I find that very hard and, therefore, I find the conclusions that are being made in these papers pretty daring, so to say.

To your second question: In the last three years I have been writing a book on the Unitary Patent and Unified Patent Court which will come out later this year with Heymanns. My book also includes some strategic considerations and in this regard I had studied the article of Kühnen/Claessen[1] and also the more detailed work of Karin Cremers[2], who unfortunately has left academia, and her co-workers. When I then read the article by Hess et al. in Mitteilungen it immediately struck me that the authors had completely neglected the fact that in only about 50% of all infringement cases there is a nullity action and it was clear that they had made an error in reasoning here. I had no intention, however, to write about it until I visited a seminar about the UPC where Winfried Tilmann said that the patent system is under attack altogether, especially due to the said article. During a break I had a coffee with him and told him about the flaw in the article. After I had explained what I meant to him he urged me to write the article and who am I to turn down a request from Mr Tilmann?

Is there an endemic issue with regard to the accuracy of data on the impact and functioning of the European patent system and does this present a danger? Are you aware of instances where policy has been founded on unsubstantiated information?

I do not think that there is a danger with the accuracy of data. The quality of the data is usually very good. If there is a problem then this usually in the interpretation of the data and that other important aspects are neglected, especially those that cannot be easily measured. The interesting part about the two articles I cited is that they have neglected some data which was easily retrievable.

The only policy-making process in IP that I followed closely was that of the Unitary Patent and Unified Patent court, especially the drafting of the rules of the Unified Patent Court. Here I cannot see that unsubstantiated information played an essential role.

What would you say to those who support a weakening or dismantling of the patent system? What is your message to those who shape European intellectual property policy?

I would like to answer them that if a society wants innovation, it probably has to foster it. In this regard, I should say that I find many recent academic articles that deal with the subject of innovation rather poor from an intellectual side and this is disheartening. Just one example: There are neoliberals like Boldrin and Levine[3] who state that innovation needs no stimulation at all and you should leave this to the free market and they condemn the patent system to the bone. However, when you take a closer look into their articles you find that they only discuss US patent law, as if a patent system outside the US does not exist. I am sure that even US professionals and academics would agree with me that the US patent system is not a good pars pro toto for the patent system overall. Things like these explain the unfortunate low level of discussion that we find in many places.

I disagree with Boldrin and Levine that innovation needs no stipulation and the best counter-example I find is the case of the Wenzhou Industrial Lighters Association where in a total neoliberal economic environment a system of design protection evolved simply on a form of general agreements within an industry. [4]

At this point I should say that I have evolved my own patent theory in an article in Mitteilungen in 2013[5] which - summarised - states that patents exist because society needs fostering of innovation and it is cheaper and easier for society to have patents issued rather than giving out premiums and subsidies which cost money and cause problems with making the right choices. Just an example: In Germany we have the discussion about financial support for electric cars, where now a buyer of an electric car can get a reward from the government. I am not an expert in this area and have absolutely no idea whether this financial support is useful at all - but the mere fact that in the discussion even accusations of corruption or bias were raised, says quite a lot in my opinion. In a patent system this financial support is paid by the market and these problems are avoided. I would guess that if you wanted to abolish the patent system in favour of subsidies or premiums then this is probably not a good idea.

In this regard, I find a discussion we had recently at the 9th Rheinische Biopatentforum, a conference that our firm organises, very interesting. Here it was discussed amongst professionals from private practice but also from pharma and other companies whether larger and broader data exclusivity could actually be a substitute for patenting, especially when it comes to the second and further generation of patents. We did not come to a conclusion but still I find that approach very interesting, though it has many weaknesses. For instance, and just as an example, a larger data exclusivity has the problem that you can only give it to one company where as with patents, several pieces of a big innovative process may go to different applicants.

How has your paper been received so far?

The reason that you are conducting this interview with me does speak for itself, doesn't it? I would consider it the second best received paper I have written so far, only being topped by the article in Mittelungen 2013 where I search for commonalities between patents and interpretation of literature.[6]

Do you have other work in the pipeline on patent reform and innovation?

As I mentioned, currently I am finalising a book on the Unitary Patent and Unified Patent Court that will come out at Heymanns in autumn or winter this year. I have somewhat very initial plans to write a longer essay or even a book about my patent theory, but this is so far just a thought.

This article first appeared in May 2016 on the Social Science Research Network and can also be downloaded here.

No more searching for the charger