Patent Trespass and the Royalty Gap: Exploring the Nature and Impact of “Patent Holdout” 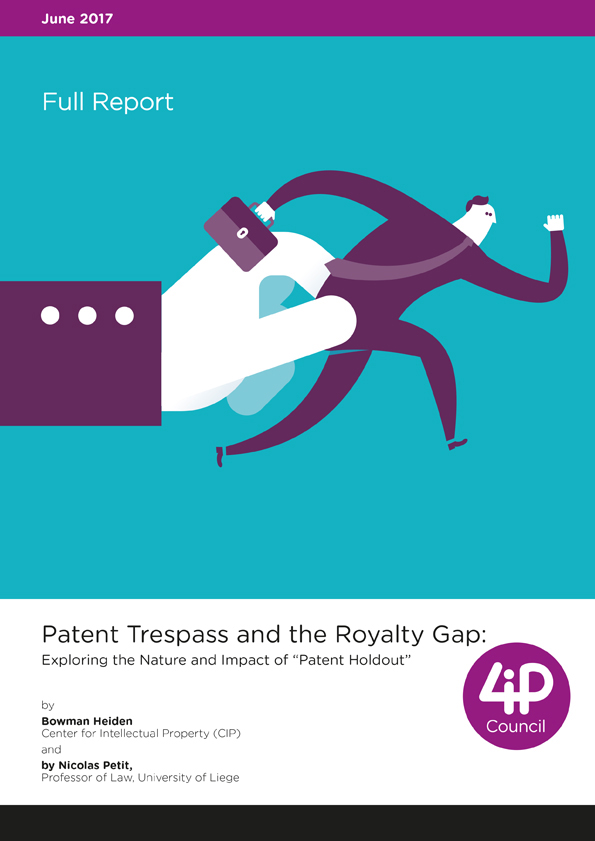 This paper reviews the meaning of holdout in mainstream economics. This inquiry leads to an unexpected discovery: holdout is a term of art that invariably defines the conduct of a property owner, not the conduct of technology implementers. On this basis, a discussion is opened on the possible policy impact that the choice of a concept like “holdup” had on policy makers, as opposed to “holdout”.  The study is based in part on a cross-sectional investigation. Throughout 2016 and 2017, the authors conducted qualitative interviews with five industry stakeholders on both sides of the patent spectrum, namely SEP holders and SEP implementers.

Patent Trespass and the Royalty Gap: Exploring the Nature and Impact of “Patent Holdout”  June 2017

The paper investigates the concept of “patent trespass” from a theoretical and empirical perspective. The authors believe that the improper concept of “patent holdout” should be replaced with another concept that conforms with the mainstream economic theory, proposing “patent trespass” as an alternative. The “patent holdup” concept proposed in the early patent economics literature is incompatible with the conventional understanding of “holdup theory” and is, indeed, an incomplete hypothesis. Stressing the importance of “patent trespass” (including factors such as the lower likelihood to misguide and create semantic “traps”) the authors conclude that courts and policy makers should give “patent trespass” as much as importance as the “holdup” narrative.

“Patent holdup” has been the theory that gained more attention from academic and policy circles, and it is said to occur when an essential patent owner makes licensing or cross-licensing more onerous given the indispensability of infringing the SEP and implementers’ sunk costs. In contrast, “patent holdout” describes the conduct of implementers of Standard Essential Patents (SEPs) who deliberately choose to avoid the conclusion of a licensing agreement or withhold payment, in the hope of paying either zero or reduced royalties.

• The “patent holdup” literature dispenses with explaining how the proposed theory can stand in the real world, absent the basic conditions of opportunism and asset specificity required for the theory to apply.

• There are ambiguities regarding the connection between Transaction Cost Economics (TCE) and the patent holdup theory. There is a need for more empirical investigation in this area.

“Patent trespass” is a transactional problem. When negotiations and transfer payments become structured into market norms, one group of actors may hold a consistent, recurrent and predominant bargaining position over others. In a trespass scenario, a systemic effect can be envisioned as a tax on new R&D products. In the context of SEPs, this would manifest itself in a reduction in performance of delay in the development of new standards.

• Interviews conducted with market players point to several important plus factors that can transform transactional patent trespass into systematic and systemic issues (such as the relative size, resources and reputation of patent owners and implementers). It is suggested that a systematic patent trespass effect can be deemed to occur when 30% or more of a relevant market is unlicensed.

• Markets which exhibit a long tail of unlicensed implementers may be the byproduct of collective action problems and the likelihood of patent trespass is influenced by the clarity, predictability and stability of the legal framework in relation to patent enforcement, according to the interviews.

• The systemic effect of patent trespass is primarily experienced through the impact of the technology market through the development and performance of consensus-based standards.

The term patent “trespass” may be more appropriate than patent “holdout” because the concept captures the idea that the product of a technology implementer involves a “relatively gross invasion” over a technology developer’s patent claims. “Patent trespass” can be said to arise when a SEP holder’s licensing revenues decrease because technology implementers avoid the conclusion of a licensing agreement on terms that correspond to recognised industry practices.

• The scholarship on “patent trespass” is scant, possibly because of the initial concept’s deviation from standard economic theory.

• Interviews conducted highlight that patent trespass is intentional and that trespassing firms may pursue strategic goals that go beyond pure revenue sharing.

• While “patent trespass” consists in of a refusal to take a licence, it often manifests itself through less explicit strategies and even if the patent owner can successfully claim compensatory damages with interest rates, patent trespass is not simply akin to a deferred payment.