IPR Policy as Strategy. The Battle to Define the Meaning of FRAND 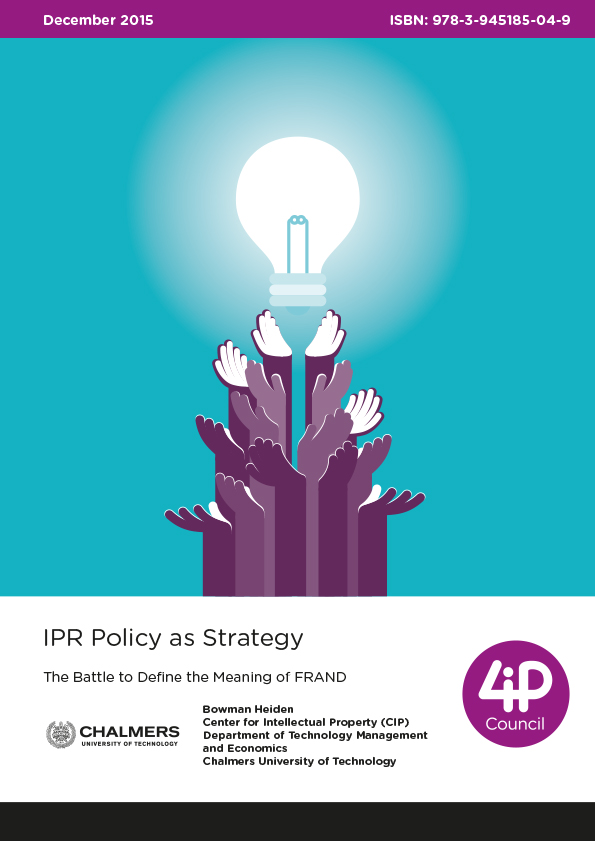 Addresses the ongoing battle to define the meaning of F/RAND as a key institution in determining the value of standard essential patents (SEPs) and the transformation of the telecommunication industry in the emerging knowledge economy.

The value of patents affects the performance of firms and the structure of markets, which in turn impacts the dynamic and static efficiency of the economy. Thus any discussion that impacts the value of patents through legislative reform, new judicial norms, or other regulatory or contractual regimes will have a systemic effect on the economy and thus must be informed by an understanding of the empirical evidence, the potential theoretical consequences of change, and the self-assertive interests of the parties that are lobbying for change. Without this holistic evaluation we are likely to initiate change that creates greater inequities, potentially lowering instead of raising aggregate social welfare.

One of the most high-stakes arenas where strong business interests are currently debating and defining the value of patents is within the telecommunication industry. While much of the attention in the popular press has focused on the smart phone war between Apple and Samsung, which is a relatively traditional industrial battle over competing products, a potentially more important intellectual property battle concerning the future of telecommunications in the knowledge economy has been ensuing in parallel. This is not a conventional battle over the market share of products between horizontal competitors on product markets, but a battle among vertical collaborators over the appropriation of value between upstream technology owners and downstream product implementers. As such, the current conflict in the context of telecommunication standards is part of a wider paradigm shift from an industrial to a knowledge economy characterized by an increasing number of actors that commercialize knowledge through intellectual property based business models. Thus market conflicts between vertical actors over royalties regarding technology standards can carry a greater systemic impact as it questions the viability of a new division of innovative labor in the economy.

This study addresses the ongoing battle to define the meaning of F/RAND as a key institution in determining the value of standard essential patents (SEPs) and the transformation of the telecommunication industry in the emerging knowledge economy. In particular, this study investigates the social construction of F/RAND and SEP value by deconstructing the key concepts and self-assertive interests of industry actors that have formed the basis for recent judicial, regulatory, and policy decisions. The primary goal is to unveil the normative game whereby actors seek to define reality from the perspective of their own self-interest, whether economic or ideological, in hopes that this will facilitate more objective research and more effective decision-making by standard-setting organizations, courts, competition authorities, and legislators. The full paper will be available in an academic journal in the near future. Below is a short summary of the preliminary findings.