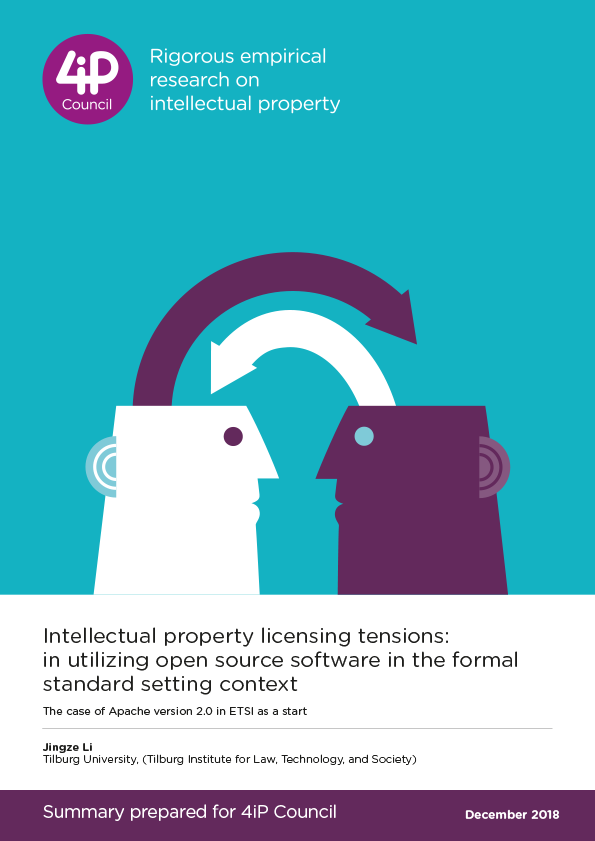 This summary report explores the following questions: “What are the differences between standards development organisations (SDOs)’ IPR policies and open source licenses in dealing with IPRs?” “What frictions may arise from such differences in their interactions?” “Whether the current IPRs framework of formal SDOs is adequate to embrace OSS?”. It is drawn by the author from a paper first published by the ITU: J. Li, "Intellectual property licensing tensions in incorporating open source into formal standard setting context — The case of Apache V.2 in ETSI as a start," 2017 ITU Kaleidoscope: Challenges for a Data-Driven Society (ITU K), Nanjing, 2017, pp. 1-8.
https://papers.ssrn.com/sol3/papers.cfm?abstract_id=3083840
The paper is available for download in the IEEE document library.
An extended version of the paper has been published by the European Journal of Law and Technology and is available on SSRN:
https://papers.ssrn.com/sol3/papers.cfm?abstract_id=3308022

Open Source Software (OSS) is increasingly active in shaping future standards such as 5G and the Internet of Things. Realizing this, formal standard development organizations (SDOs) are also exploring ways to utilize OSS. However, questions are often asked about how to address Intellectual Property Rights (IPRs) issues, such as compatibility issue between Fair, Reasonable and Non-Discriminatory (FRAND) licensing commitment on Standard Essential Patents (SEPs) and an open source license. Against this background, this paper endeavours to answer the following questions: “What are the differences between SDOs’ IPR policies and open source licenses in dealing with IPRs?” “What frictions may arise from such differences in their interactions?” “Whether the current IPRs framework of formal SDOs is adequate to embrace OSS?”.

We first introduce the differences between SDOs IPR policies and open source licenses in dealing with copyright and patent right (Part 2). These differences were compared between IPR rules represented from three selected SDOs, namely ITU, ETSI and IEEE, and features shown in the “nine most popular open source licenses” approved by the OSI. We find that SDOs have structured and stable rules regarding patent and copyright. With respect to patent right, these three SDOs allow SEP holders to make a FRAND commitment, which enables patent owners and implementers to negotiate royalty rates and other conditions for SEPs. Copyright obtained less attention in SDOs so far. The three SDOs all hold the copyright ownership of their standards specifications. Distributions and modifications are restricted. Generally speaking, standards value the stability of a specification in order to facilitate interoperability among components, product, services and software. Free distribution and modification on specifications are often not allowed. On the other hand, open source licenses are basically copyright licenses on software code. Not all open sources are the same, but they share common features as required by the OSI Open Source Definition. A right owner gives away some of aspects of their exclusivity of the copyright, such as the right to use, to modify and to distribute for free if recipients agree to the open source license. Many open source licenses (6 of the nine most popular ones) also include a patent clause to grant patent right in a similar way. Overall, the essence of an open source license is to make source code available and to encourage redistribution and, especially with some licenses, contribution of improvements back to the original code project.