Based in Bonn and Berlin, HTGF’s team of experienced investment managers and start-up experts has helped forge more than 500 start-ups since 2005.

What is a seed fund and how does it work?

Also, seed funds are usually quite small, in the region of €10-20 million. Ours has a much larger budget of €316,5 million. While we have tended to fund companies in Germany, Austria and Switzerland we are allowed to fund worldwide.

How do you find companies?

Through different routes, companies often come to us as we have become well known but we also go to events, start-up competitions and conduct active sourcing by looking at various databases such as Crunchbase or Pitchbook. Around 30-40 per cent of the companies we have funded originate in universities or research facilities; others are spin-offs from existing, larger companies or are founder created.

Do seed funds help young companies beyond the financial aspect?

Yes and they should, as young companies frequently need a lot of help. They are typically under resourced in a number of areas such as management and sales capacity. The type of support we provide is specific to the company’s need and is managed through our investment managers who draw on a network of experienced trainers and specialised consultants. We have also created the HTGF Academy, a training programme designed to help the companies that we fund fill their knowledge gaps.

What are the common characteristics of the companies that HTGF funds?

What is the difference between those start-ups that succeed and those that fail?

Start-ups usually fail because they run out of money: they haven’t been able to generate enough revenue or be capable of further fundraising. Companies can be too optimistic on both of these points. Exaggerated spending and fighting within the founder team are other reasons.

It isn’t easy to raise funds. That’s why an important task for HTGF is to help new entrants get more funding and provide support on strategy to enable fast performance. 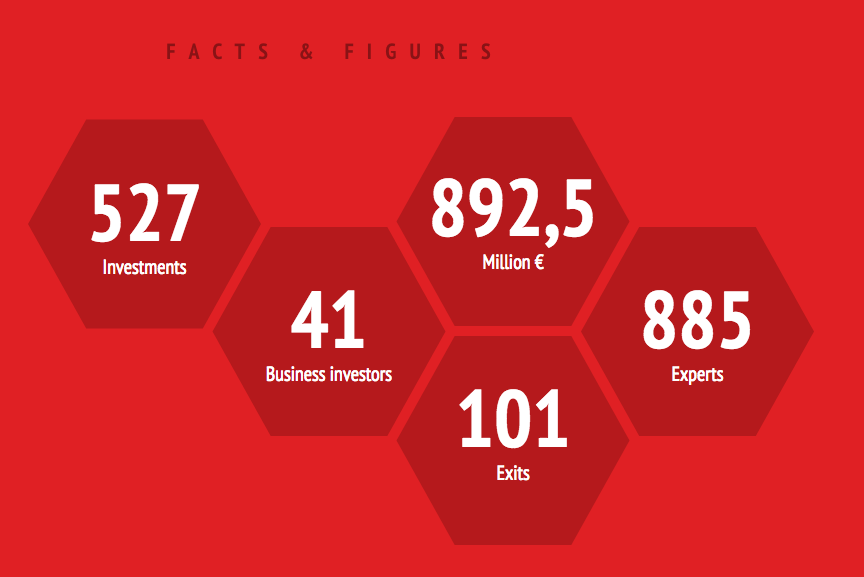 What stake do you usually take and what comes after seed funding?

In the past, 15 per cent has been our standard stake but lately we have become more flexible, taking between 10 and 20 per cent. Our fund is a public private partnership coming from the German government, a government owned bank, and industry. Initially, the industry stake in the fund was 6 per cent. Today it is 34 per cent, which represented euro 106 million in 2018. Industry invests to make a profit but, more importantly, to access new business models and ideas. They see the fund as a complement to their later stage investment work.

After seed funding, we typically don’t sell our stake. Usually the whole company gets sold but sometimes we sell our stake to another shareholder or investment and, in one instance, a company we funded became publicly listed.

What percentage of HTGF funded companies have been successful and why is this so?

Over the past 13.5 years we have funded 530 companies. It is hard to tell whether recent investments – say, over the past 1-3 years - have been successful but looking at longer-term investments, we have sold 101 successfully and saw around 150 fail. Failure means that we lose money from a small to a large amount. Generally speaking, we expect up to 50 per cent of our funded companies to fail.

What kinds of IP rights do you consider in your due diligence when investing or advising (potential) start-ups?

An assessment of all the IP rights across in a potential investment is an HTGF requirement and we ask that the IP rights be transferred to the company before we invest.

It is important to us to be sure that when a company is sold, the IP is within the company, and we find this easier to set this up at the outset. We could lose money if a potential acquirer doesn’t like the IP set-up. Establishing a clean set-up can be difficult when, for example, the patents are in a university, and in such cases, we may look at licensing it in. It is tricky too, when investing in software solutions, as there are often no IP rights attached or there can be a complicated mixture of open source and proprietary software that is difficult to audit and to manage.

What does the existence of a patent or the potential to patent mean to you when you consider investing?

Patents are often a tool used to defend an idea from attack and are effective in any discussions between start-ups. It can become trickier, due to issues of time and cost, for a start-up to defend its patents against a big company that chooses to ignore patent rights or actively infringes them.

The strongest value of the patent is often when the company gets sold because acquirers like patents. They perceive a patent portfolio as a real asset.

Beyond a signal of an innovation that is ‘secure’, are there other benefits to patenting? Are they a sign of something else?

There are other benefits, such the possibility to trade patent rights with other companies, but generally speaking, we find that many start-ups are not proficient on what a patent really is, and how it might generate value.

Do you see common patterns or challenges in relation to start-up patenting?

There can be issues around geographic scope, which can be too narrow, and for software, where it can be difficult to patent except with expert advice. It is very expensive too. We once had a company that spend 0.5 million annually on patent fees. In the end this proved a worthwhile investment but the risk was high.

Another issue is the pace of change in start-ups as often the idea that’s patented is not the same one that is marketed.

Do you have a message for people developing policy in this area?

Many policy processes are slow and unpredictable. We need more reliable, less expensive, faster administrative processes. I fully support initiatives to remove country specific legislation in the area of IP.

For an update on the status of the European Unitary Patent, which aims to simplify patenting across the EU, see our feature with Yann Ménière, Chief Economist at the European Patent Office.

Race ahead and make a commercial success as quickly as possible and in parallel, keep making the product better and better and better. Don’t waste too much time on administrative tasks. It is important to get out into the market to test and refine your product or service.